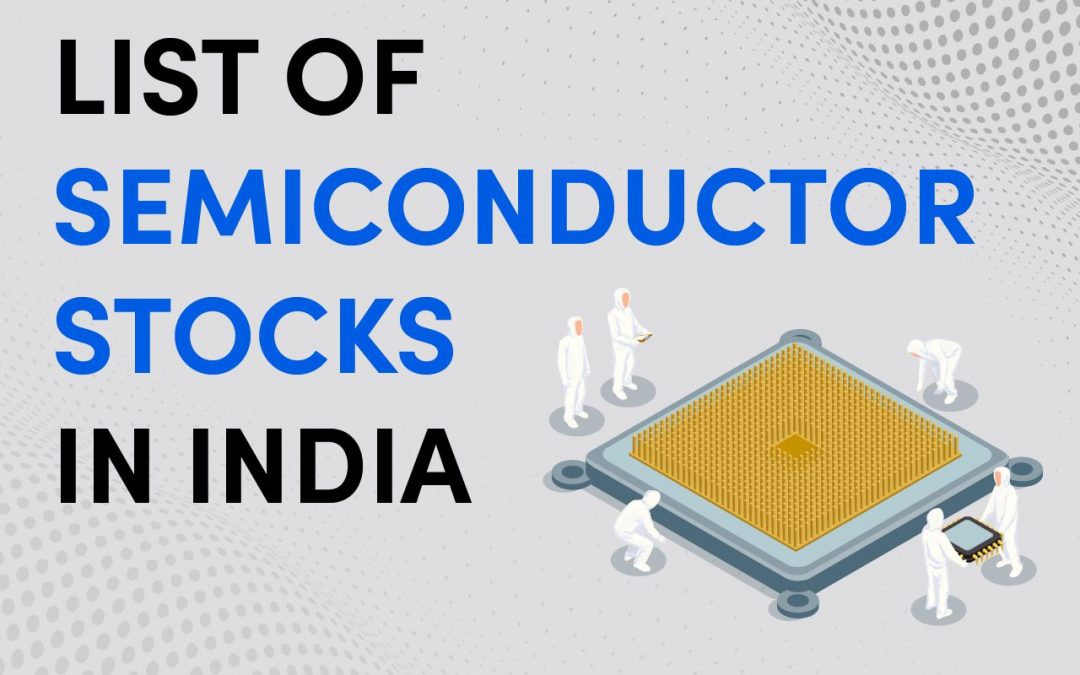 Semiconductor Companies Stocks in India: The pandemic had highlighted India’s need to be self-reliant in many areas, including semiconductors. But what exactly is a semiconductor? Not known to many it is a big deal in the electronic world. Simply put, it is a device that controls the flow of electricity back and forth between an electrical device.

Such electrical devices include smartphones, gaming devices, computers, electric vehicles, etc. It is somewhat technical to understand how a semiconductor works and an electrical engineer could probably give better insights into how it works. But that is not our concern in this article.

Semiconductor stocks are probably the most popular in the stock market today. If you’re actively looking for a high-growth investment, semiconductors should be your first choice.

The need for semiconductors will only increase as companies scramble to digitize. So, if you believe the semiconductor motif is merely a fad that will fade away soon, think again.

The government has a slew of measures planned for domestic semiconductor production, and India now imports all of its semiconductor necessities. The gap between supply and demand will persist, and semiconductor stocks will again cause a stir.

Only a few organizations are actively or partially invested in this industry. This is subject to rapid change, and the appropriate choice might be the deciding factor in your portfolio.

Let’s dive into this blog on Semiconductor Companies Stocks in India and try finding more about it.

This company is first on our list of semiconductor companies listed in India. The company was established in 1993, and it is an electronics manufacturing company that makes electronic goods, such as LED TVs, smartphones, washing machines, and CCTV security systems, among other things.

In terms of profit and losses, the organization has had good growth in profit to the tune of 38.66 percent over the last three years and sales growth of 36.93 percent. During the previous three years, the company’s ROE and ROCE have been 22.60 percent and 30.83 percent, respectively. But on the other hand, its PE of 159.95 is quite high.

It would be a good investment to buy stocks in this company. You can take courses on Fingrad that will equip you with the knowledge you need to buy stocks. As a result, it ranks top on our list of Semiconductor Companies Stocks in India.

SPEL Semiconductor Ltd is second on our list of semiconductor companies listed in India. This company is India’s only and very first semiconductor test facility and assembly point. The company’s return on assets is efficient at 85.20 days, one of its strengths and shortcomings.

The promoter holds 59.17 percent of the company, and operating leverage is substantial for the firm. However, the corporation has had a terrible profitability rate of -0.65 percent and poor gross margins.

Investment in the stock market is always a good idea, and you can start with this company.

The organization’s strengths include being nearly debt-free and having a 29.95 percent ROE track record. The organization also boasts a respectable 28.67% gross margin.

The organization is now selling at a PE of 43.91 in its strengths. It also has a high dividend yield of 5.27 percent. This company’s profit growth has averaged 51.52 percent. Purchasing stock in this company would undoubtedly be a wise investment for you.

ALSO READ How To Make A Career In The Stock Market?

It began as an Indian semiconductor manufacturer in 1999. They serve vendors and OEM providers with their extensive product line.

In terms of gains and losses, the revenue growth CAGR over the last 3 years has been maintained at 22.65%. In addition, in the past 3 years, the organization has generated strong income levels. However, it has a low ROE of -23.12 percent and a poor ROCE of -8.11 percent over the last three years.

This company provides power modules, phase control thyristors, water-cooled assemblies, and more. Welding Rectifiers, Battery Chargers, and Electroplating Rectifiers are among its primary customers. The company’s gross profit for FY21 was around Rs 1.33 crore, with revenue of Rs 30.07 crore.

Vedanta Limited, originally Sterlite Industries, is a global mining business based in India. It is among the world’s major oil and gas and mining companies, with extensive activities in India, South Africa, and Namibia. It mines to oil and gas, silver, iron ore, zinc, lead, copper, aluminum, and steel. Their tentacles also spread into power.

The company recently declared that it would build a semiconductor manufacturing factory in conjunction with Foxconn within the next 2 years. This is Vedanta’s second effort at entering the semiconductor market, following the failure of its previous intention to build up a display facility with a Rs 60,000 crore commitment.

In FY21, the firm made revenues of Rs 88,021 crores. The company had a gross profit of Rs 11,602 crore in the same year, improving the previous year’s loss. Besides that, the corporation has been paying significant dividends and so has an increasing dividend yield.

The company’s debt-to-equity ratio stands at 1.05. Hence, this stock ranks last on our list of Semiconductor Companies Stocks in India.

This list of semiconductor companies’ stocks in India is probably what you need to start. Over the last several years, the use of semiconductors in many sectors has raised demand by ten.

Furthermore, the Semiconductor Companies Stocks in India market benefit from rising internet availability and the expansion of smart gadgets. This might be an excellent time for investors to enter the market. However, investors with little knowledge can take courses on FinGrad to make the right investment strategy.