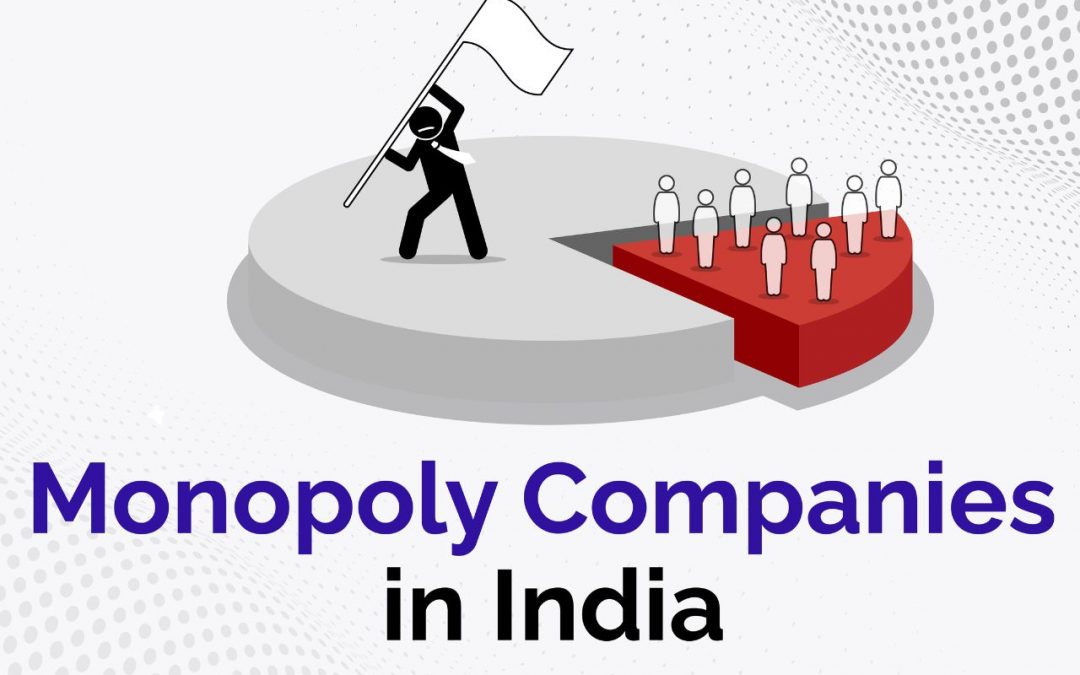 Monopoly Companies in India: How many examples of monopolistic businesses can you think of in India? Today, we look at one of Warren Buffett’s favorite types of business monopolies but from the perspective of the Indian market.

A monopoly is a term used to describe the type of business that dominates its respective markets owing to the enormous advantage they have over its competitors. It’s hard to compete with these businesses, and they always get the biggest market share for the goods and services they offer.

However, when it comes to investment, the stocks of these firms are referred to as MOAT stocks. The term “moat” refers to a ditch often dug around medieval castles. This was done as part of the defensive preparations, so it would be more difficult for attackers to storm the castle.

The moat around the castle should be as broad and deep as possible to provide a maximum defense. In the business world, a moat is a barrier to entry that prevents new competitors from entering the market.

These barriers can take the form of large amounts of capital, restrictions imposed by the government, or an advantage that a company possesses that makes it difficult for other businesses to compete with them. Similarly, a monopoly is also a significant moat.

The Top Monopoly Companies in India

Let us look at some of the top monopoly companies in India:

The Indian Railways use the services of the Indian Railway Catering and Tourism Corporation, abbreviated as IRCTC, for ticketing, catering, and tourism. Although it started as an entity that the government entirely controlled, its shares are now listed on the National Stock Exchange.

Since only one entity is tasked with running Indian Railways, IRCTC wields the unrivaled power of a monopoly.

The government announced its intention to privatize this industry in stages, explaining its reasoning in its announcement.

Coal India Limited is a public sector organization that is engaged in the industry of mining and processing coal. The company has a market share of 82%. That, of course, is an impressive market share percentage. It is the corporation that produces the most coal globally and does it via its seven companies that produce coal.

The current percentage of the government’s interest in the company is 66.13 percent. This makes the company one of the top monopoly companies in India.

HZL is an Indian integrated mining and resources company that produces zinc, silver, cadmium, and lead. Hindustan Zinc Limited has a market share equivalent to 78 percent in the primary zinc business.

The company is the fourth biggest zinc-lead smelter in the world and the second-largest zinc-lead miner. India Coal, Hindalco, and NALCO are some of HZL’s industry rivals.

Currently, the government of India has 29.5 percent of the company’s shares, while Vedanta Limited, the company’s parent company, holds 64.9 percent.

A baby at least 6 months old may start taking Cerelac, a quick cereal. Nestle is the market leader in baby nutrition and products intended to replace breast milk or other types of milk worldwide.

In India, the company has been given the title of “The Most Valuable Food Brand.” Nestle Cerelac has around 96.5 percent of the market share in the Indian stock market.

Was first established as Hindustan Aircraft Ltd. Since then, the company has been actively engaged in the industry. The government owns approximately 75% of the company, making it one of Asia’s most prominent aerospace enterprises.

Pidilite Industries is a multinational brand based in India and specializes in adhesives. It offers a wide variety of goods, including building chemicals, adhesives, sealants, and waterproofing solutions, as well as arts and crafts supplies, industrial resins, and polymers, amongst other things.

This company’s continued success may be attributed to its listening to customer feedback and actively responding by improving existing offerings and developing innovative new ones. This corporation currently controls roughly 70% of the market share available.

Manufacturing and engineering are the primary focuses of Bharat Heavy Electricals Limited, which the Indian government wholly controls. It is the power generation equipment manufacturing company with the largest market share in India.

BHEL is concerned with the design, engineering, production, development, testing, servicing, and commissioning of a wide variety of products and services for the essential facets of the economy, such as oil and gas, power, defense, transportation, renewable energy, etc.

These are just some of the industries that BHEL serves. The government of India owns 63.17 percent of the company, while the remaining shares are sold openly on the National Stock Exchange and the Bombay Stock Exchange.

Marico is a popular Indian FMCG company, although Saffola and Parachute are its most successful products. The corporation has come a long way in 30 years. Safola has a 73% market share in premium refined oil products. “Parachute” has a 59% market share.

These generate 90% of their revenue, making it one of India’s top monopoly companies.

In this article, we covered some of the top monopoly companies in India. Monopoly or huge Moat stocks are gold mines for value investors. Investing in a moat stock may generate considerable long-term rewards.