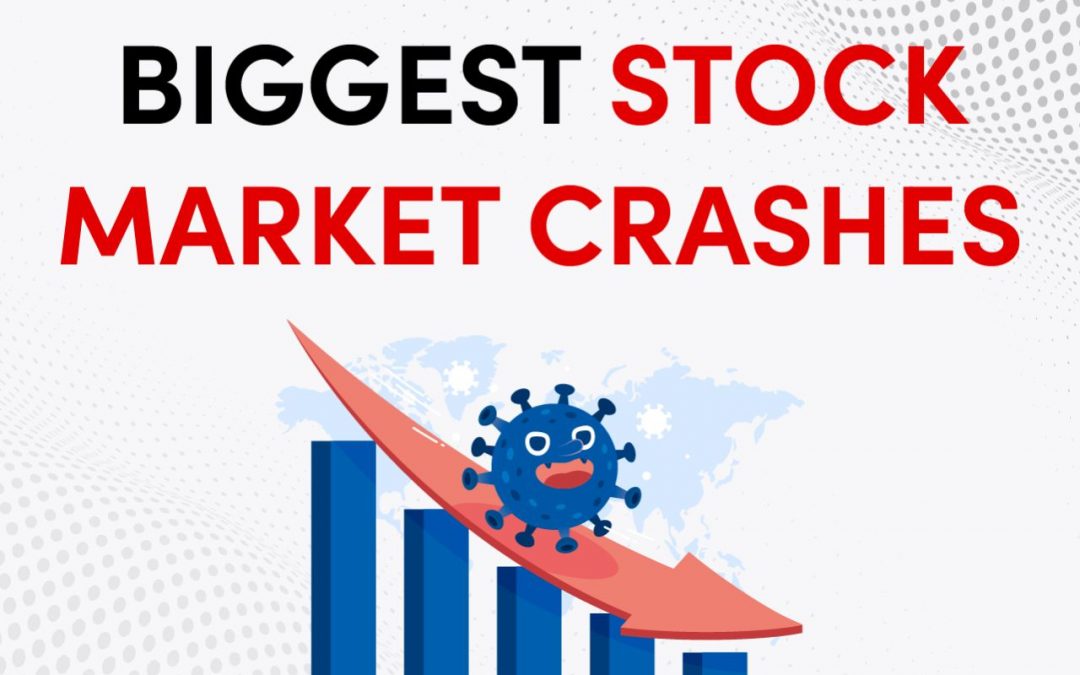 List of Biggest Stock Market Crashes: From the crash in 1929 to the more recent 2020 economic meltdown in the wake of covid-19, stock markets have been known to be volatile and impact entire continents. As they sink, a lot of investors who bet big on the markets drown as well.

Entire banks and institutions have been victims of these crashes and it blindsides the entire world time and time again. Today’s FinGrad blog takes us through the biggest stock market crashes in recent history.

Let’s look at The Biggest Stock Market Crashes that rocked the world. Keep reading to learn more about this.

Margin lending was also trending at the time. This meant that investors and institutes were allowed to buy stocks for 10% of their value. Simultaneously, they were also lending securities to other firms and investors as well.

The repercussions of this interlocked relationship would take decades to unfold. What came in 1929 would later be the cause of The Great Depression. When the Dow-Jones Index crashed, it would not recover to its peak for the next 25 years.

The Crash of October 1987 affected close to twenty-three world markets and wiped out investors’ money up to $ 1.71 trillion dollars. Every major world stock exchange – New York, London,  Beijing, and Tokyo witnessed its impact.  But what caused the crash?

Similar to 1929, the DJIA saw record growth from the early ’80s till the inevitable crash. Trading volumes at the NYSE also shot up from 32 million to 181 million shares. The Bull Run of the ’80s lasted about 7 years from 1982, up to the subsequent crash in 1987.

One major cause of the crash was computer-based trading, which was new at the time. The crash is called Black Monday because on Oct. 19th, 1987, the market opened with a substantial difference between the volume of sell orders vs. buy orders.

Due to the time difference, other markets like New Zealand and Australia also suffered crashes upwards of 20%, making it Black Tuesday. At the time, programmed trading was not live-tested in a market crash scenario.

From 1995-2000, Internet companies stormed the stock exchanges. An abundance of capital led retail and institutional investors to pump money into tech-based companies and startups. Massive speculation, ignoring fundamental analyses of companies, and hype of the internet era all led to the inevitable crash.

The NASDAQ, an index with the top tech companies at the time, trampolined from 1,000 in 1995 to 5,048.62 in the year 2000. Most of these companies were overvalued, including established companies such as Cisco, Intel, Amazon, etc. There were 477 IPOs in 1999, and most of them were internet companies.

ALSO READ: How To Plan Financial Goals And Achieve Them?

After the 1929 Great Depression, the 2008 subprime mortgage crisis is widely considered the second biggest crash in history. The crash occurred between 2007 and 2008 but it was a series of events that finally led to the housing crisis.

The Fed slashed interest rates to 1.5% in 2003 to attract cash lending by businesses and consumers. This led to intensive borrowing by homeowners as mortgage rates were substantially low. Even though the housing market had skyrocketed, homeowners were allowed to borrow up to 100% of their property value.

Some of the borrowers had low or no credit rating, borrowing well above their credit limit.

These loans, which were issued by housing and commercial banks, were then sold as low-risk securities to investors. The financial instruments were called mortgage-backed securities. These securities were compiled with other AAA-rated securities and marketed as “low-risk” and safe.

As early as 2004, homeownership saturated as close to 70% of Americans owned a residential property. Within 2 years in 2006, the prices of houses began to fall.  Some houses dropped well below their mortgage value, so even if homeowners sold their houses to pay off their mortgages, they would still be in debt to the banks.

When homeowners inevitably defaulted on their mortgage payments, most lenders ended up filing for bankruptcy. Renowned investment firms such as Lehman Brothers fell after the crisis whereas other firms relied on government bailouts.

The eventual crash caused a domino effect across other markets in the world as well.

In the most recent crash of the decade, markets collapsed in the wake of the coronavirus pandemic in the first few months of 2020. The DJIA faced the lowest single-day plunge since 1929.

Entire countries were forced to declare lockdown to curb the spread across the world, which meant a halt in business operations, manufacturing, and supply chain disruptions.

GDPs of advanced and developing countries went into the negative as entire industries were shut down. Tourism and travel came to a complete halt. Multiple waves of lockdowns and outbreaks had left countries dealing with fluctuating revenue.

That’s all for today’s blog on the biggest stock market crashes, Let us know your thoughts in the comment section below!

If you’re new to the stock market and don’t know where to start, there are a few good online courses you can take. FinGrad has introduced a value investing course in educating you on analyzing and evaluating different firms.