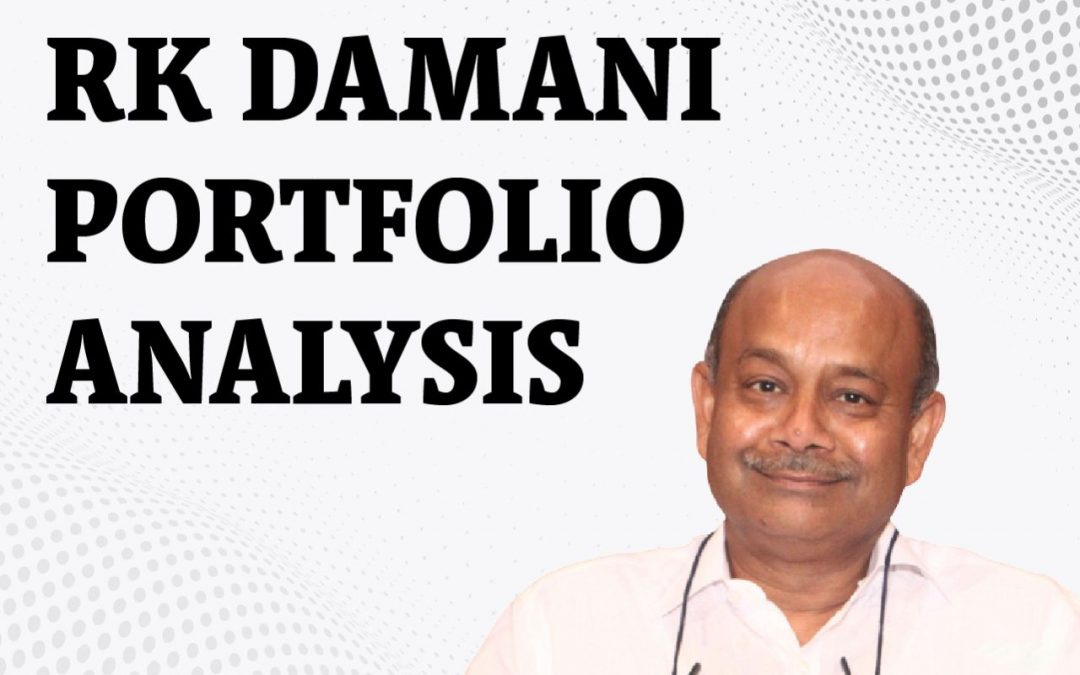 RK Damani Portfolio Analysis: Who is Radhakishan Damani? While most people might not know about the billionaire investor, we have all come across the supermarket chain – D-Mart.

Damani founded D-Mart in 2002 and it is one of the most successful wholesale-to-retail supermarket chains in India. R.K. Damani is also one of the richest men in the world and a proactive stock market investor.

With a current net worth of $16.8 Billion, we can’t help but be curious about his portfolio and holdings. Let’s take a look at the article on RK Damani portfolio analysis for today’s Finvestor article.

Over 97% of R.K. Damani’s portfolio is his holding in Avenue Supermarts, which is the parent company of DMart. He incorporated the company in 2002, however, it only went public in 2017.

VST Industries or Vazir Sultan Tobacco is a manufacturer of tobacco products, headquartered in Hyderabad, Telangana. It is the second-largest manufacturer of cigarettes in India.

As of March 2022, the ace investor had increased his stake in the cigarette manufacturer from 32.26% to 32.34%. He had purchased 12,000 equity shares apart from his existing stake in the company.

Trent Ltd is a subsidiary of the Tata Group. They currently own and operate Westside, Landmark, Zudio, and Star Hypermarkets. Trent Ltd is solely a retail store organization and was founded in 1998.

The retail products offered by the group range from clothing and books to groceries and everyday essentials. Damani holds a stake of 1.5% in the company, which has reduced from the 2.6% stake as of the quarter ending September 2020.

The company has six subsidiaries that diversify across insurance, asset management, and broking. The ace investor has kept his holdings steady in the NBFC at 2.4% over the past two years.

The UB Group is a conglomerate that is primarily involved in the manufacturing and sale of liquors. The most reputed is the Kingfisher brand, through which it markets its beer line.

The company is headquartered in Bangalore, India. The group is presently the largest manufacturer of beer in India, with over 40% market share of the Indian brewing industry.

His present holdings stand at a steady 1.5% or 466.4 crores worth of equity and have held onto it unchanged as per the latest data.

3M India is a subsidiary of 3M USA. The parent company holds a 75% stake in its Indian subsidiary. Their primary business operations are technology, healthcare, and automotive aftermarket service.

Some of the well-known brands under the conglomerate include Littman, Scotch, Scotch-Brite, and Post-It. Damani has steadily held his 1.5% stake in the company as of March 2022.

This is a logistics company headquartered in Mumbai, India. They also have a cargo line subsidiary, Blue Dart Aviation. The company has one of the most extensive delivery networks in Asia.

At present, they have over 35476 locations in India. Damani’s Bright Star Investments trimmed its holdings in the company in Dec 2021. They hold a 1.40 percent stake in the logistics organization, as compared to 1.47% in December 2021.

They have been consistently trimming their holding in the company from their 3.4% stake in March 2020.

Metropolis Healthcare is a chain of diagnostic companies, with its central laboratory in Mumbai, Maharashtra. They provide lab tests and reports for a range of disorders.

They are one of the leading diagnostic companies in India. A closer look at Damani’s holdings shows that he has been consistently offloading shares.

The institutional investor held a 2.9% stake in the diagnostics lab company as of March 2020. His current holdings are a 1.1% stake or 112.6 crores.

The company was formerly known as Sundaram Insurance Broking Limited. The company was incorporated in 1993 and is based in Chennai, India. Damani increased his holdings from 1.7% as of March 2021 to 1.9% in the quarter ending March 2022.

Astra Microwave is an ISO 9001 company that focuses on manufacturing RF and microwave systems. Their products’ applications include Defence and Civil communications systems.

The company was incorporated in 1991. As per the latest data, R.K. Damani holds a 1% stake in the company and has held onto his entire stake worth 20.3 crores.

Andhra paper is a paper pulp manufacturing company incorporated in 1964. The company was acquired by International Paper in 2011, an American paper company.

Andhra Paper currently employs over 2,500 employees and has two manufacturing plants in  Rajahmundry and Kadiyam. The ace investor holds about 1.3% or 16.1 crores worth of equity in Andhra Paper.

BF Utilities is a power-producing company incorporated in 2000. The company generates electricity through wind-assisted power plants at Thoseghar in the Satara District of Maharashtra.

They also have activities in steel making and forging. He holds a stake of 1.3% and has not offloaded or added any shares as of March 2022.

They are manufacturers of fine chemicals such as terpene, camphor,  Camphene, Isobornyl Acetate, and synthetic resins. Their first plant was set up in 1996 in Mumbai. They are currently one of the largest manufacturers of camphor in India.

He held a stake of 4.4% in the chemical company at the quarter ending September 2021 and currently holds a 2.2% equity stake, trimming his holding by half. And with this stock, our post on RK Damani Portfolio Analysis comes to an end.

Is Radhakishan Damani A Trader Or Investor?

R.K. Damani is most certainly an investor, and his holdings make him one of the richest people in India. He is known as a mentor to the Big Bull Rakesh Jhunjhunwala.

In the hit series “Scam 1992”, R K Damani is portrayed as a bearish trader before he shifts to value investing. After this, he starts his successful venture of supermarkets which we now know as D-Mart.

Who Is The No 1 Stock Investor In India?

With a net worth of $27.6 billion dollars, RK Damani is India’s richest investor. His holdings as a promoter in Avenue Supermarts have skyrocketed his net worth and represent his largest investment.

R.K. Damani has one of the most impressive portfolios among major investors in India. His motto in terms of investing is to hold on to positions for the long term and only invest in companies that have a viable business model.

It is clear that a majority of his portfolio is invested in his own company. Apart from Avenue Supermarts, his stake is diversified across sectors such as tobacco, cement, chemicals, and retail goods.

This shows that he invests in companies that have the potential to substantially grow over time. Holding onto such investments could provide multifold returns in the near future.

That’s all for now on RK Damani Portfolio Analysis. If you liked this article, do let us know your views in the comment section below. Also, do check out some of our FREE courses on stock market investing at Join FinGrad. Happy Investing!