10 Must Watch Stock Market Movies For Every Investor! 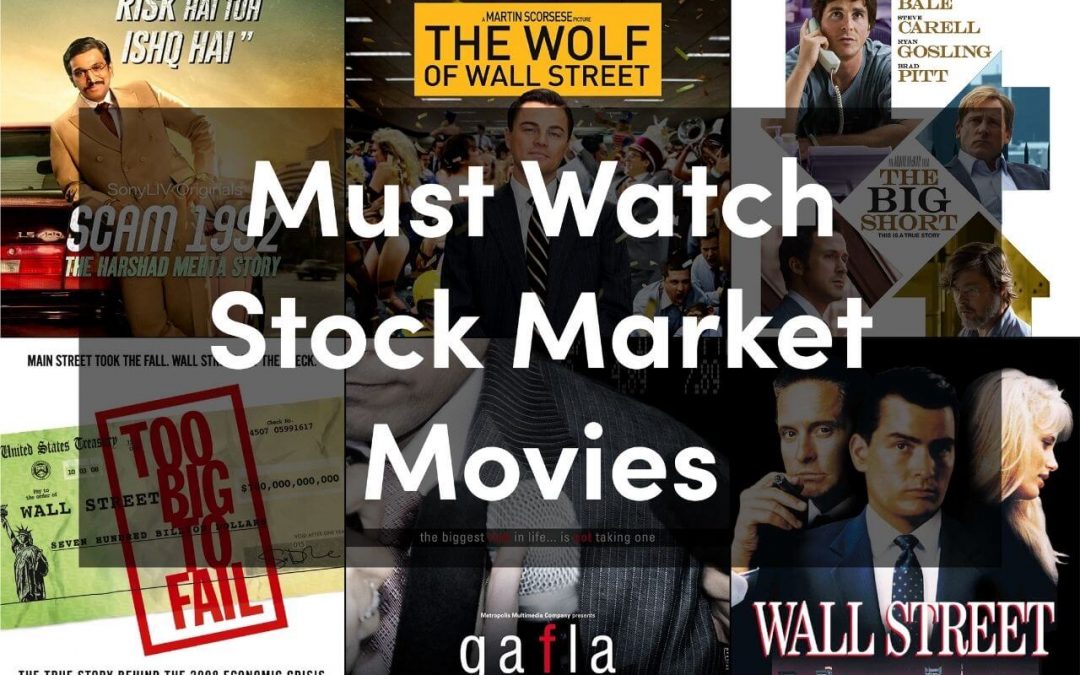 Must Watch Stock Market Movies: True stories make for great cinema! And finance is one of the best true story thrillers in Hollywood and Bollywood. The public response and critical reviews on Scam 1992 show how much we admire good storytelling and awe behind stock markets and controversies.

With gripping storylines and epic one-liners, these are some of the best movies to watch on capital markets and important events in recent history. Let’s take a look at some movies that tell the stories behind some important and historical financial events.

The first pick of the lot – The Harshad Mehta story titled Scam 1992. While it is not a movie like the other additions to this list, it is undeniably the most important mention. The Web series, now streaming on OTT platforms, takes us through the rise and fall of the controversial investor during the eighties and nineties.

With a 9.3 IMDb rating, it is one of the highest-rated Indian series in the world. The series takes us through the life of Harshad Mehta, a stockbroker on Dalal Street who quickly rose to be one of the richest men in India, and his eventful downfall.

Harshad Mehta’s story is still widely known, even though the events occurred some thirty years ago. The web series had extremely positive reviews, being nominated for almost every award and winning most, including best director, actor, cinematography, etc.

A sequel titled Scam 2003 was announced in 2021 by Sony Liv. The story will cover the stamp paper scam by Abdul Karim Telgi in 2003.

Must Watch Stock Market Movies #2 – The Wolf Of Wall Street

Directed by Martin Scorcese, the movie takes us through the comic true story of Jordan Belfort, a Wall Street-based stockbroker. Played by Oscar-winning actor Leonardo DiCaprio, the movie is based on a memoir of the same name by Jordan Belfort.

What makes this movie unique is that it explains the term “penny stocks” which were quite popular in the nineties. Jordan opened an investment firm with partner and neighbour Donnie Azhoff called “Stratton Oakmont”.

The movie follows the darker side of stockbroking in a comical sense. The movie was nominated for 5 Academy Awards and 2 Golden Globe awards.  It currently has a rating of 8.2 on IMDb.

The 2008 Mortgage crisis is still widely considered as the worst market crash of the 21st century.  Yet the fine details of the crash were hard for the public to understand unless you worked on Wall Street yourself.

The Big Short is a non-fiction slow-burn thriller that reveals the story behind a handful of investors and capitalists who foresaw the collapse of the housing market before the rest of the world. The movie is based on a book of the same name by Micheal Lewis.

The film was released in 2015 and gained a positive critics’ response. (IMDb – 7.8), earning the movie multiple Oscar nominations as well.

Must Watch Stock Market Movies #4 – Too Big To Fail

Too Big to Fail is a television film that follows the recent aftermath of the 2008 housing crash and how some key figures sought to contain the damage. The movie is based on a book of the same name by Andrew Sorkin.

Leading investment firms at the time like Bear Stearns and Lehman Brothers struggled to survive the fallout. The movie is critically acclaimed, having been nominated for multiple Emmy and Golden Globe awards.

Before Scam 1992 and The Big Bull (2021), Gafla came out with the fictionalized story of Harshad Mehta in 2006. The story revolves around Subodh, a normal man who tries to make it big in the stock market. The lead character is loosely based on Harshad Mehta and gets caught up in a scandal in the film.

The movie explains stock markets in the most simple way possible, making it easier to understand, especially for viewers who do not have a clear idea about stock markets. The movie has an IMDb rating of 7.3 and is currently free to play on YouTube.

Wall Street is one of the oldest movies on this list yet it’s still relevant to current markets and the investment banking world. Bud Fox is an up-and-coming stockbroker who strives to work under his mentor and idol, Gordon Gekko, a corporate shark.

Wall Street takes a deeper look into Insider trading that was and is rampant among investment sharks and market insiders. Price fluctuations by institutional investors were quite common at the time. The film’s plot is simple yet delivers the message – Every dream has a price.

Margin Call takes a closer look at the 2007 financial crisis, quite literally. The entire movie takes the viewer through the first 24 hours of the market crash and how one investment bank maneuvered through dangerous waters on an already sinking ship.

The movie received positive responses from audiences and had been nominated for Best Screenplay. With a star-studded cast and a unique perspective on the crisis, this movie is a must-watch for all finance students and market enthusiasts.

Baazaar is the Saif-Ali Khan Starrer that follows the plotline of Wall Street (1987). Rizwan Ahmed, a young stockbroker from Allahabad wants to make it big in the stock market so he moves to Mumbai in the hopes of working at the best broking firm in the financial capital.

When he makes it to Mumbai, he strives to work for a top Investment firm, where he manages to get Shakun Kothari, a diamond baron as their client. Rizwan is brought into the fold as a mentee to Shakun, teaching him the craft of the trade.

What follows is a trail of lies and deceit which ends in court hearings and jail sentences. Bazaar has a rating of 6.5 on IMDb.

Whenever we want the latest stock market updates, we either look at our trading accounts or turn on CNBC tv. On the news channels, we hear endless recommendations, forecasts, and predictions about NIFTY 50, SENSEX, blue chip stocks, and multibaggers as well. But what if you listen to these elevators and lose your life savings?

This is the storyline behind Money Monster, when Lee Gates, a TV market host played by George Clooney recommends a stock that tanks in the market and wipes out $ 800 million dollars in wealth. One of these investors sneaks himself onto the set of the studio and the series of the events that follow lead to an epic, unexpected ending.

Money Monster is rated 6.5 on IMDb and is streaming on Amazon Prime.

Bernie Madoff, the main accused in the biggest Ponzi scheme in history is the inspiration behind “ Chasing Madoff”. Unlike the other movies on this list, Chasing Madoff is a documentary, that tells the story from the perspective of his captor. Once the chairman of NASDAQ, he was accused and convicted of running a Ponzi scheme worth about $18 billion dollars.

The documentary follows over 10 years of investigation into Madoff and his fraudulent investment firm, Bernard L. Madoff Investment Securities. He was sentenced to 150 years in prison after being convicted of securities fraud, money laundering, and perjury, among other felonies.