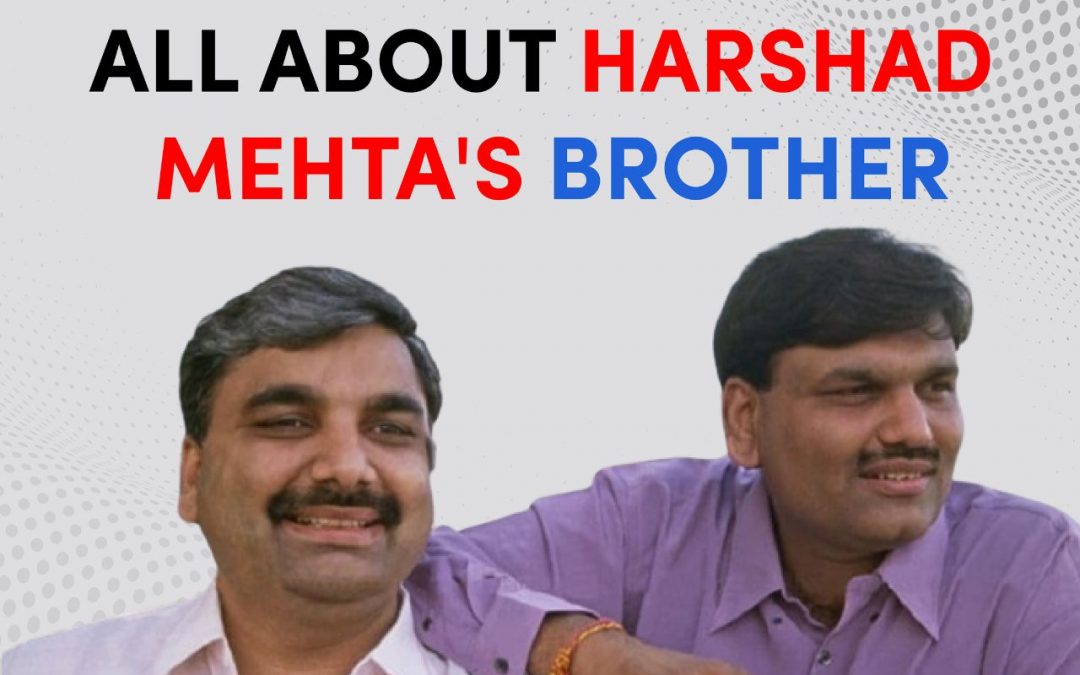 All About Harshad Mehta’s Brother – Where is Ashwin Mehta Now?

Know about Harshad Mehta’s Brother: Who worked as a stock and money market dealer, and was the primary con artist behind the scheme. The collapse of the Indian stock market was brought on by a well-planned and executed stock fraud that made use of bank receipts and stamp paper.

He defrauded the financial system to the tune of nearly one billion rupees so that he could acquire equities on the Bombay Stock Exchange. The total market value of the equities was more than India’s entire annual expenditure on education and healthcare combined.

He was able to get securities from the State Bank of India against fraudulent cheques signed by corrupt officials, but he failed to deliver the securities after securing them. This was all part of an elaborate scheme that Mehta coordinated. And his brother, Ashwin Mehta, was right in the thick of things.

The Biography of Ashwin Mehta

Ashwin Mehta is an attorney in the High Court and Supreme Court of Mumbai. In his mid-50s, he earned a law degree, and he is now a busy lawyer, practicing before the Mumbai High Court and the Supreme Court. To clear his brother’s identity, he battled various court proceedings alone and paid approximately Rs 1,700 crores to banks.

He is well known for being Harshad Mehta brother. He was born in the Gujarat district of Rajkot, Paneli Moti. His father, Shantilal Mehta, had a textile company, while his mother was a homemaker. His education was finished at Holy Cross Byron Bazar.

The “1992 security fraud” perpetrated by his older brother, Harshad Mehta, drew attention to him. Additionally, he was sentenced to time served in this instance. Harshad Mehta’s 1992 swindle cost Ashwin Mehta and his sister-in-law Jyoti Mehta a lot of money.

He was both Harshad’s appointed legal representative and a stockbroker at the same time. A special court in 2018 acquitted Ashwin Mehta of defrauding the State Bank of India. The case against Harshad Mehta was dropped shortly after his death a decade earlier in 2001.

From Harshad Mehta’s Brother to an Indian Lawyer

Harshad Mehta’s rapid climb to fame and subsequent fall from grace all occurred within a few short years, and the circumstances leading up to his death remain murky. He came and went like a vortex, causing a flurry in the financial markets and then disappearing just as quickly.

Those familiar with “Scam 1992,” a SonyLiv miniseries about a stock market fraud in India, will be familiar with its gripping narrative. Harshad Mehta, the “Amitabh Bachchan of Dalal Street,” exposed the stock market’s many shortcomings.

The Indian stock market had to be restructured after the 1992 crisis. The Securities and Exchange Board of India was set up right away after the fraud to make sure that it would never happen again.

The past has shown that even in the presence of SEBI, fraudsters will always find a method to defraud the system. That, however, is a different tale. Harshad Mehta is often the center of attention when discussing the Scam of 1992. The sheer audacity and temerity of the swindle is the only thing that captivates the public.

However, it’s important to keep in mind that a large-scale con usually involves a larger group of individuals. The people behind the ringleader are just as vital as the genius himself, and the system here is complex enough that it’s hard to say which is more significant.

As a result, we now have Ashwin Mehta, Harshad Mehta brother, the ringleader of the 1992 securities fraud.

Hemant Kher, who wrote and directed “SCAM 1992,” has brought this character to life. Harshad Mehta became engaged in a slew of legal proceedings when Sucheta Dalal exposed the fraud and released her report.

All of his investors began to withdraw from him, and both Harshad and Harshad Mehta’s Brother was sentenced to a three-month prison term. As we all know, it’s an instinct to follow in the footsteps of the successful and flee from troublemakers.

A total of 600 civil lawsuits and 76 criminal charges have been filed against the Mehtas. The authorities took most of the family’s substantial assets and imposed heavy tax penalties on the ringleaders. Most of the charges against Harshad Mehta were withdrawn only after he died tragically in Tihar Jail in 2001.

As a result, Harshad Mehta brother, Ashwin, was forced to deal with the consequences of his brother’s actions. In some ways, Harshad got off very easily. In other words, he did nothing more than set up the swindle and then walked away.

Where is Ashwin Mehta Now?

It was Harshad Mehta who first brought Ashwin to public attention. One would think he should still be extensively interested in the stock market based on its involvement.

However, after the revelation of the fraud and Harshad Mehta’s death, Ashwin Mehta, who was in his mid-50s at the time, began practicing law and became a successful lawyer.

It was up to him as a lawyer to defend the family in court against charges brought against them. Due to his perseverance, the charges against him were eventually dismissed on December 14, 2018.

In the same year, Harshad Mehta’s wife won a lawsuit against stockbroker Kishore Janani and Federal Bank, who owed him 6 crores in 1992. The court ordered that the sum be paid, plus 18% interest, for a total of Rs. 524 crores.

Ashwin Mehta’s net worth is estimated to be in the range of Rs 20 to 30 crore. Now he practices law before the Bombay High Court and the Supreme Court of India. However, the family is only said to be living on one level of Madhulika Apartments.

Ashwin Mehta’s net worth has fallen quite a lot after all the allegations he and his brother faced after the events of 1992. Later on, he quit the world of the stock market and is currently pursuing his profession as a lawyer. Though he has lost quite a bit of his net worth since 1992, he is still rich with a net worth of $ 4 million.

There is no doubt that the 1992 stock market scam cast a huge dark cloud over the Mehta family. However, Harshad Mehta’s brother, Ashwin, rose above this cloud to change the misfortune that befell his family by studying law in his mid-50s.

His strong resolve helped his family overcome the many trials that were faced during that period. He now has a successful career in law and has represented many people both in the Bombay high court and the Supreme Court of India. He and his family now lead a quiet life and can finally put the past behind them.